Tobey has an art, design, and programming practice focused on collaboratively celebrating the everyday behaviors of craft, time, tradition, and humor.

If you like, he is happy to send you examples of the work he's done with others.

Recently, Tobey's worked with Nicole Mauser on the exhibition, Privates, from Sep 6–Nov 4, 2017, at The H.F. Johnson Gallery of Art at Carthage College in Kenosha, Wisconsin.

translated by Willa and Edwin Muir

«Some say the word Odradek is of Slavonic origin, and try to account for it on that basis. Others again believe it to be of German origin, only influenced by Slavonic. The uncertainty of both interpretations allows one to assume with justice that neither is accurate, especially as neither of them provides an intelligent meaning of the word.

No one, of course, would occupy himself with such studies if there were not a creature called Odradek. At first glance it looks like a flat star-shaped spool for thread, and indeed it does seem to have thread wound upon it; to be sure, they are only old, broken-off bits of thread, knotted and tangled together, of the most varied sorts and colors. But it is not only a spool, for a small wooden crossbar sticks out of the middle of the star, and another small rod is joined to that at a right angle. By means of this latter rod on one side and one of the points of the star on the other, the whole thing can stand upright as if on two legs.

One is tempted to believe that the creature once had some sort of intelligible shape and is now only a broken-down remnant. Yet this does not seem to be the case; at least there is no sign of it; nowhere is there an unfinished or unbroken surface to suggest anything of the kind; the whole thing looks senseless enough, but in its own way perfectly finished. In any case, closer scrutiny is impossible, since Odradek is extraordinarily nimble and can never be laid hold of.

He lurks by turns in the garret, the stairway, the lobbies, the entrance hall. Often for months on end he is not to be seen; then he has presumably moved into other houses; but he always comes faithfully back to our house again. Many a time when you go out of the door and he happens just to be leaning directly beneath you against the banisters you feel inclined to speak to him. Of course, you put no difficult questions to him, you treat him--he is so diminutive that you cannot help it--rather like a child. "Well, what's your name?" you ask him. "Odradek," he says. "And where do you live?" "No fixed abode," he says and laughs; but it is only the kind of laughter that has no lungs behind it. It sounds rather like the rustling of fallen leaves. And that is usually the end of the conversation. Even these answers are not always forthcoming; often he stays mute for a long time, as wooden as his appearance.

I ask myself, to no purpose, what is likely to happen to him? Can he possibly die? Anything that dies has had some kind of aim in life, some kind of activity, which has worn out; but that does not apply to Odradek. Am I to suppose, then, that he will always be rolling down the stairs, with ends of thread trailing after him, right before the feet of my children, and my children's children? He does no harm to anyone that one can see; but the idea that he is likely to survive me I find almost painful». 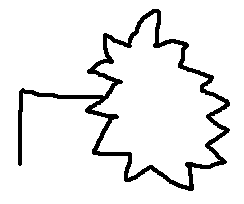